Finally Done It! Check it Out, You Won't Regret it! 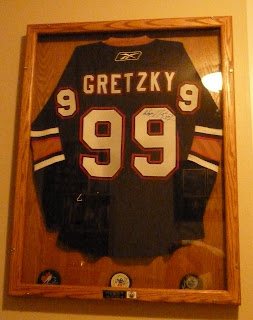 I finally finished my Gretzky frame! It took a long time, I built it from scratch and had no idea what I was doing. I had some good friends talk me through some issues with woodworking and I plugged away...Oak frame with 3mm glass. My three signed pucks fit nicely in the bottom with lots of room for the jersey. Feels really cool to look at it on the wall. There might be some fighting in the room though, it's beside all my Flames items...lol!
Posted by kc at 7:45 PM 3 comments:

Hull and Chase as Promised! 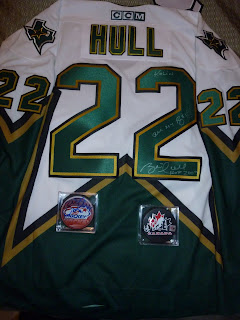 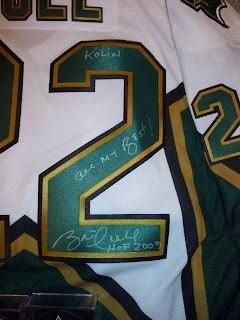 Personalized with HOF Inscriptions!
I have lots of pics and some videos to upload. I will try something new, I am going to tell some of their stories about life in the dressing room, NHL and on the road. It will be a MP3 file where you can just click to listen. These will all be uploaded in the next few days.
Posted by kc at 8:12 PM No comments:

I am out of town now so here's the lowdown condensed version. The U of Saskatchewan Off The Leash Luncheon was today. Guest speaker was Brett Hull and emcee was Kelly Chase. Those two were the funniest pair I have ever heard. They are buddies and it shows. I took some 100 pics and lots of videos so those will get uploaded Sunday. Brett signed my Stars jersey with HOF yearN didn't ask for that either but I did ask him to personalize it. He added "All my best". That's Taveras, Yzerman and Hull with that type of jersey, cool. I knew if I asked him to do that I'd get the extras. Chase signed my puck and his Battle of the Blades skating partner was there too. Not sure how to spell her name but she signed my puck along with Chase. I got a pic with Brett and we chatted about his dad and uncle, he gave me the gears, yah. Will tell the story Sunday. But sadly that brings an end to my season. Back to TTM and card pack breaks. Til Sunday...
Posted by kc at 4:50 PM No comments:

Battle of the Blades


Chaser is skating for the Children's Hospital in Saskatoon. Please vote if you can.

I was touched by Russ's speech about his dad at the Pink Warrior Classic. His dad suffered from mental illness, his charity helps people with mental illness in BC. Vote if you can!
Posted by kc at 8:07 PM No comments:

Craig Conroy still continues to be one the nice guys of the NHL. He signed autographs in Wednesday's game and smiled while he did. A little fellow about 5 years old, in fact 5 years old came down to the bench with 3 minutes left to try to get Conroy's autograph. My wife and I were both laughing at this little fellow, knew all the player's numbers and names, hated the Oilers and wanted Conroy's autograph real bad. He was not able to get Conroy's autograph. He got Miikka's stick instead. Miikka was the first star and skated back to the bench and handed his stick to the little boy. The little boy shook his head no, he wanted Conroy's autograph. Miikka really wasn't sure what to say so my wife grabbed the stick, Miikka thought she was grabbing it for herself. She was 1 foot away and looked at Miikka and said, "I'm giving it to him."
Miikka realized she was trying to help the boy out and gave it to her. She gave to the boy and he still didn't want it. His mom was there by then and took both the stick and young Flames fan home.
I also reached for Glencross's stick after the game and he banged the glass pointing at another young boy so I just handed it to the boy. I wasn't sure if Curtis was mad or just wanted me to know it was for the boy. It didn't bother me at all, Curtis has been great to me so no harm no foul.
Posted by kc at 9:35 PM No comments: