The Paul Henderson's Team Canada 1972 Jersey Tour was in Saskatoon today. The tour is funded by Smart Centres owned by Mitchell Goldhar and is traveling across Canada to share the jersey with Canadians. I was there a few minutes after it opened to be welcomed at the door by a Tour Worker. He was welcoming and held the door open for me. The first area was a small room which had a few Team Canada items. The first was a framed Team Canada 1972 Card set. This is where is got very cool, very quick. The whole card set was signed by Team Canada 1972 Team. This was owned by Mr. Henderson and on loan to the Tour. I was impressed by the entrance and the lady offered me a 1972 Goal Scarf and button. Hmmm, very cool.
I went through the curtain to see the Holy Grail of sports collectibles and sports memorabilia. 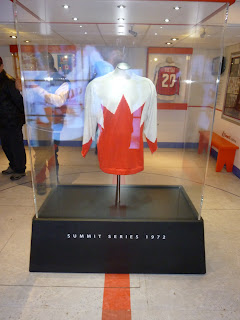 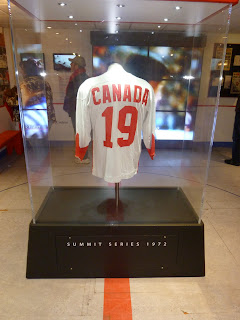 I honestly was at a loss for words at first. We are all collectors and here was perhaps the top piece of sports memorabilia in Canada. I took pictures of the displays, it was hard to believe the entire display area was on the back of a semi truck. There was lots of room to walk and even sit down. I overheard one of the workers tell a patron Mr. Henderson would not sign autographs. They were afraid people would be lined up around the block in each city and loose the appeal of the jersey. Eeek, that sucks. That would have made my top 3 for sure but oh well....
They announced that Mr. Henderson would be showing up at 1:00pm and we could just hang out and wait. So, I sat at the bench in front of his jersey and took pictures, yes for 20 mins, I took close to 50 pictures of the same thing. But, well worth it.
I had my back turned to the jersey and heard Mr. Henderson's voice. He showed up just after 1:00 laughing that his 6 concussions was the reason why he was late. He told stories and took questions from the audience. I asked him if, they were ever scared if they had any success while playing in Moscow. He said they were not scared but nervous. They were locked down at night and had to hand their keys in to the desk at night. He also mentioned that he thought the whole area Team Canada was in was bugged so they never offered anything but some, as Mr. Henderson said, "They'd think I was a great lover!"
I will post a few more stories and post all of the picture tomorrow. And no autographs, but answer me this; should I be mad? I don't feel disappointed at all. Would you be? 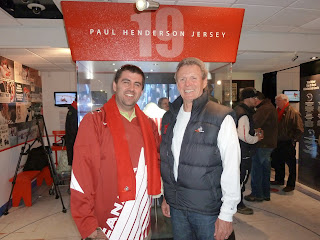 A picture with Paul Henderson with his jersey while you're wearing a Team Canada jersey.
Posted by kc at 7:19 PM

Spending an afternoon near the man tops an autograph, in my book.

Thanks, the more I think about it, I agree. The puck and Hull card are on their way as of today and no cost on the Hully. That's for my forgetfulness! Cheers buddy!