Two of the Nicest Leafs, But I Need Some Help 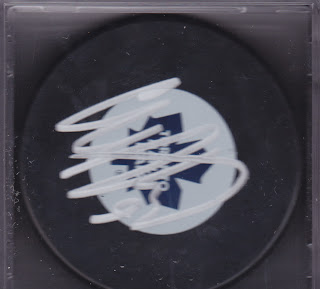 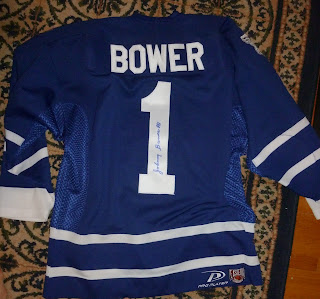 This is the jersey that I tried to get signed at the Pink Warrior classic last August with no luck. Johnny's website has a send in program, where you just pay for the item ($35 for a jersey)and shipping and they get him to sign it and return to you. Most players from that generation have that, Howe, Orr and at one time, Hull. But I need your help with this one. Once I looked at it, it did not look like Mr. Bower's signature. I have lots of items from him, a jersey from Frozen Pond, cards from UD and the items from the past summer. The Bower looks good but the 'J' doesn't. Please give me feedback, a real Bower signature or not?
Posted by kc at 4:55 PM 5 comments: 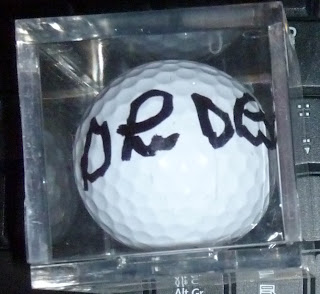 Lots of guys had balls, gloves and bags for Graham to sign. This is a Taylor Made 77 ball from the Bourque breakfast last year. 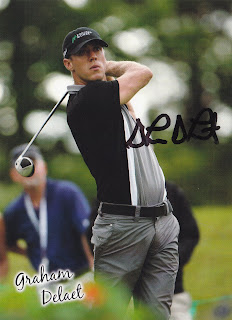 Free little 5x7's they gave out. 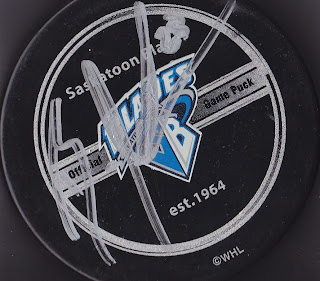 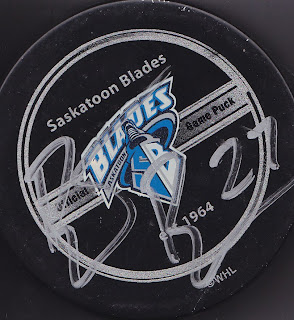 Benson, Brent
This is neat, $10 a pick and you get a signed puck or a prize. The guy looked at me like I was mad I picked a signed puck. I liked it! 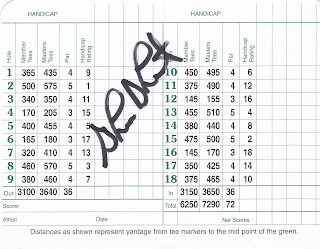 I bought the signed card off of eBay, Stephen Ames signed the front. If it was in person, I would have got the front side signed along with Ames. But it's still a Masters scorecard signed by an future star.

Now, any Sens fans want a treat? I have a signed puck from Cowen for $5 plus shipping. I can not stand the site of it so whoever wants it, it's yours. Signed at the WJC tryouts in Saskatoon 2 summers ago, before he was a big shot I guess....
Posted by kc at 5:52 PM 2 comments:

A Weird Success and A New Jerk for the Files!

We went to the Saskatoon Blades game tonight, who were playing the Spokane Chiefs. The Dakota Dunes Casino was the title game sponsor so there was a guest at the game. Graham Delaet from the PGA Tour was in town and is sponsored by the Dunes so he signed autographs and took pictures with people. He's really down to earth and a local guy too. He just got his card for 2011-12 season so he was in good spirits. There was a $10 pick a puck table, where you could win about 10 prizes or an autographed Blades player puck. The prizes really did not appeal to me but the runner up prize was a signed Blades puck. I dropped the first $10 and pulled #28 Johnson, Braeden,. I decided to try it again hoping I did not win the prize but another puck, $10 dropped and I pulled #27 Benson, Brent. Young undrafted players so $20? Good in my books. Now for the JERK of the night, Jared Cowen, Ottawa Senators draft pick. The Chiefs won the game and he was the first off the ice, I asked him if he would sign a puck and he walked by and just said, "No". Now I realize the player always has the choice but he's a local kid from about 1 hour away, family at the game...Poor in my books, I had met him at the WJC in Saskatoon and he did not strike me as that type. Hmm, he was not played in the semis or finals and the WJC and was sent down to Junior this year when the Sens had room. I smell another JERK for the labels! Pics tomorrow!
Posted by kc at 10:55 PM No comments: