The Pink Warrior Classic had a different method of delivering the speakers for the night. Kelly Gatzke, the PWC Founder, facilitated the first series of questions then the audience asked some. A few stories were really funny so as always, I recorded some and will retell some. I will post one everyday for the next five days.
The first one that comes to mind was a story Courtnall told. In his fist year or two as the Hound Line, Wendel Clark came to him before a game in Detroit. Wendel said, "If something happens and I'm not there in 3 secs, you're on your own."
So the faceoff was at center ice and Wendel was against Bob Probert, Leeman grabbed someone, and Courtnall with a rookie named Basil McRae. Courtnall said Wendel was really hammering Probert and Mcrae had a chock hold on Courtnall. He said he was turning purple and could not breathe. He heard Clark yell at McRae as he was punching Probert, "Basil, if you don't let him go, I'm going to come over there next!"
Courtnall said McRae threw his hands up in the air instantly and wanted no part of Clark. He added when Wendel had a healthy back, he was by far one of the toughest ever. 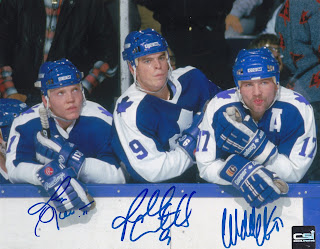